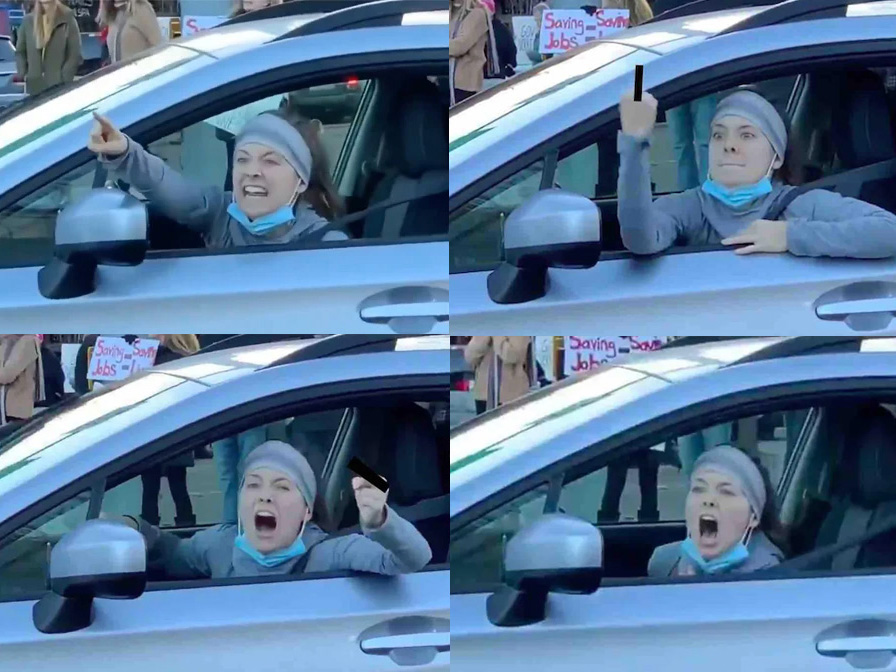 Yesterday, I watched the increasingly popular way adults teach children how to solve disagreements with others. I don’t care what your political persuasion is, your faith tradition, your culture, none of that matters — one duty that has united adults across the globe and through the ages is the responsibility to properly raise our children. We haven’t always done a good job but most of us like to believe as we’ve become more enlightened, we’re more inclined to take a cerebral approach, gently leading by example and showing our kids how to function as mature, well-adjusted, well-spoken grown-ups.

Somehow, in spite of all our great enlightenment, we’re increasingly doing a really lousy job showing our children how an articulate adult functions in the face of something that displeases her.

Yesterday, I watched a modern adult encounter some other adults and children with whom she disagreed. Using this bold new problem-solving protocol, she showed the kids how it’s done in 2020. The woman I am describing is a first-year teacher in Jefferson County. As a teacher, she has at least a four-year university degree and there’s a good chance she has a graduate degree, too. According to the Oregon School Boards Association (OSBA), the average 2020 salary for a first-year teacher in Oregon is $38,370 — this woman is an educated professional.

When she stopped at a red light while driving through Bend, the woman spied a group of anti-COVID-mask demonstrators lining the flanking sidewalks. Rolling down her window, the woman twisted her face into an awful grimace and began to shriek at the groups of adults and children gathered. Her voice rose to a sputtering spit-choked screech as she unleashed every obscenity she could summon, her gasps for breath emerging as shrill howls cut short as she heaved up another round of profane filth punctuated by clouds of flying spittle. Of course, her mask had long fallen away, allowing her boiling breath to spew its poison droplets everywhere. Her face pinched and red with rage, she choked out her identity as a teacher, but she was difficult to understand because her mouth was distorted into a demonic sneer. Still, her dozens of screamed “fuck yous!” were clear enough to interpret, along with her violent suggestion that the demonstrators — adults and children, remember — should kill themselves. As she flailed about, her arms spastically activated her windshield wipers as she gave the finger to anyone who would look at her. And look the demonstrators did because witnessing an educated, professional adult woman utterly out of control is one of those awful sights that are very difficult to ignore or forget.

I belong to a couple of unfortunate risk groups for whom COVID is a real threat — I have to take it seriously. I do not look particularly admiringly at people I know who eschew the mask. It kind of tells me that they aren’t too concerned about those of us who have genuine reason to worry. So I wasn’t exactly looking at the demonstrators in Bend with a great deal of affection.

But then the Jefferson County teacher came by and showed us all how adults — educated, professional, modern adults — solve disagreements with others in 2020. This woman is paid with public dollars to teach children. When she’s not shaming her profession by fouling herself and everyone around her with her mental excrement, she is charged with shepherding children. That appalls me. A person possessed of so little restraint, so little maturity and no dignity has no business being anywhere near children.

I do not care what your politics are. I do not care who you voted for. I do not care what you believe or disbelieve about COVID. From the dozens of Karens we see with mind-numbing regularity to the increasing numbers of shrieking Jefferson County teachers, I am tired of adults who feel they hold some false moral high ground so firmly that they have a license to act worse than animals.

This is not what I want my kids to learn is normal. I can’t imagine any sane adult would disagree.

Partial transcript: “Bitch! Kill yourself! I’m a fucking teacher, I work at the school! … Fuck you, I am a teacher! I teach the students! My students’ families are dying! Fuck all of you!”

(Disclaimers: I am not indicting teachers. Indeed, this woman is not indicative of most teachers but her education and position make her disgusting behavior even more shocking. The “Jefferson County teacher” monicker is an easy way to encapsulate the increasing number of entitled adults for whom this sort of behavior is acceptable under circumstances they deem justifiable — in terms such adults will understand, if someone pisses them off enough, it’s just fine to react with violent rage, thank you very much. Finally, it can also be argued that demonstrators with children are abrogating their own parental responsibility in rejecting the mask. But that is not the focus of this essay.)