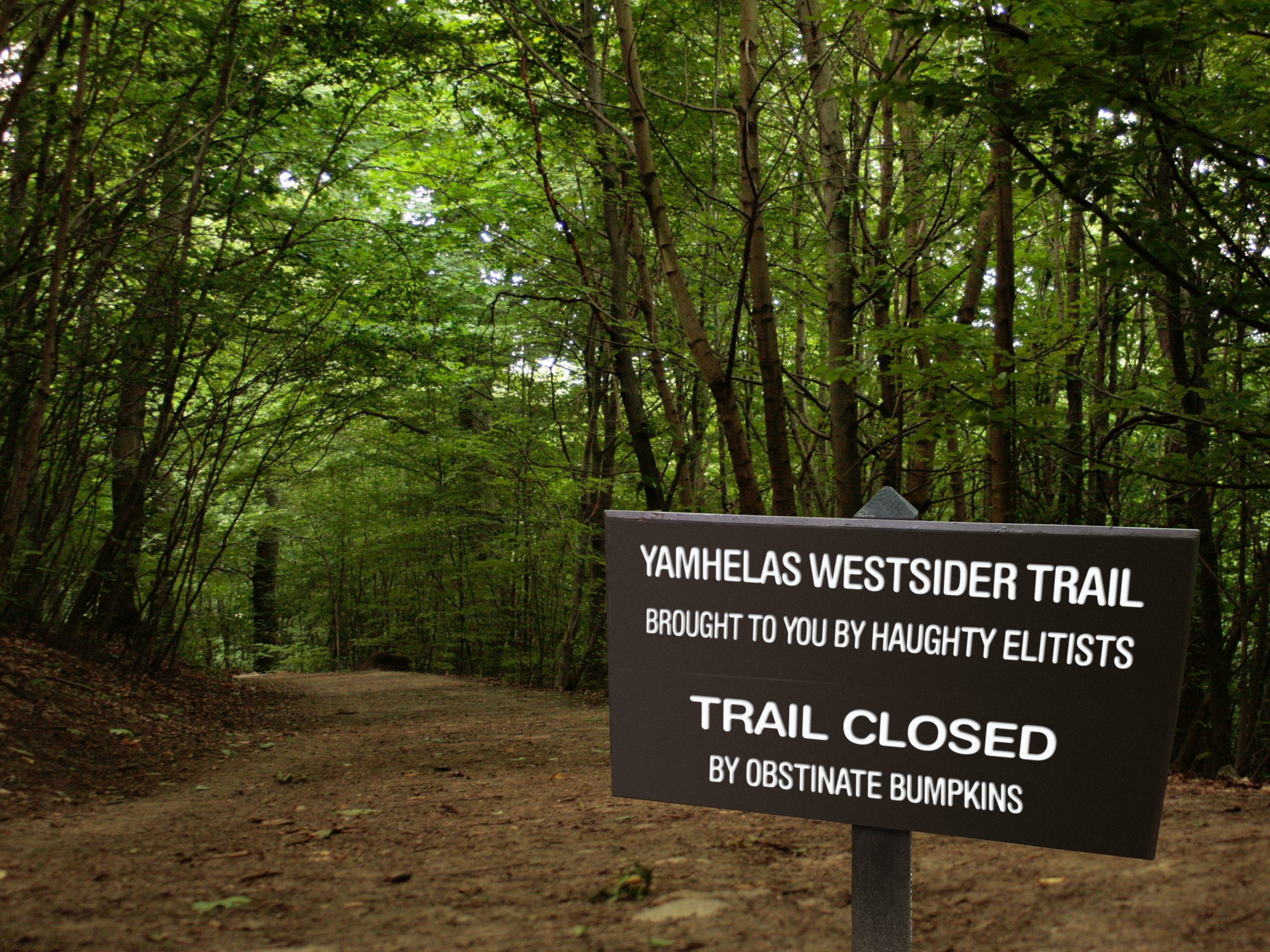 This trail thing is crazy.

I don’t believe the issue should’ve ever reached this point of ridiculous polarity. Why has it even become a partisan issue, anyway? A pedestrian trail located on an abandoned rail right-of-way — properly executed — could’ve been beneficial to everyone. Instead, we sit here with trail advocates labeled haughty elitists and farmers painted as obstinate bumpkins. Neither characterization is accurate and both are, frankly, embarrassing. Because several of my California relatives are members of various local social media groups, I get the dubious duty of explaining to them why our politics shouldn’t be viewed as a comedy event. I never have the heart to tell them that people in Oregon have viewed their own politics as comedy events for decades.

But back to the topic.

I will be the first to admit people like @Michael Firestone and @Marvin Bernards (not to mention @Yamhill County Commissioners Casey Kulla, Mary Starrett and Lindsay Berschauer) are far more fluent on the proposed Yamhelas Westsider Trail than I am. But I would like to back up and look at the issue from the perspective of a late arrival to the debate who usually finds himself positioned toward the center of an issue and who definitely has the benefit of hindsight, now that we’re so far into it.

Right off, let’s talk about farmers.

First, no one should forget it was farmers who built this place. Not loggers. Not pioneers. Not stoic nomads. Well, maybe stoic nomads but they were agrarian nomads and they dropped their wandering ways once they planted roots in this verdant valley. Farmers remain first-class citizens of the Yamhill Valley and no one should forget it. When any proposal is floated that could negatively affect farmers, they should be the first consulted and should remain key voices in any continued planning process.

Second, even in the face of the region’s increasing reliance on tourist revenue, no one should forget wineries are farms, too, and their presence here is no accident — there’s a reason so many want to farm here. I believe it is philosophically unnecessary and unhealthy to separate the various types of local farmers, even in light of widely disparate practices and sometimes-conflicting goals. From hobby farmers to commercial growers, everyone is in this together. Besides, the term “commercial farmer” alone spans a substantial spectrum. An organization like the brand new Yamhill County Ag PAC, a local nonpartisan farming ombudsman, could advocate for the needs of all local farmers in matters affecting policy — matters like this cursed trail. In the future, the PAC can strike a balance between the needs of the various types of farm operations located throughout the valley, possibly helping minimize conflicts like that of the trail.

Third, the growing farm-to-fork movement is fundamentally based on local farming. Few of us have not benefited directly from this delicious aspect of local growers. Nothing ties wineries, tourists and farmers together as obviously as a magnificent meal crafted from fresh local ingredients and accompanied by world-class local wine. Everyone in Yamhill County, regardless of politics, can be immensely proud of our ability to satiate hunger and slake thirst in extraordinary style.

Another far less celebratory point on which everyone seems to agree is that the county made missteps in the beginning of trail planning. Maybe a bunch of them. Whatever the case, it’s easy to view the county as a bully, as a big government entity exercising power over little farmers. While that point is debatable, no one can argue that the county’s considerations have now changed: two commissioners are firmly on the side of farmers and the third commissioner — who is a farmer, himself — has bent over backwards to get affected farmers to work with him on mitigating their concerns.

Farmers should at least sit down with Kulla to see if they share common ground. I am not sure, but I suspect Kulla’s two colleagues, Starrett and Berschauer, might throw in their support if farmers can be convinced to come on board.

In my opinion — especially considering Commissioner Kulla’s repeated overtures — the ball is firmly in the farmers’ court. Unfortunately, they seem bent on repeating their litany of grievances dating from the beginning of the process. I would have a much easier time accepting their complaints if they’d sit down with Commissioner Kulla, who earnestly believes those issues can be satisfactorily addressed. I am not sure, but I suspect Kulla’s two colleagues, Starrett and Berschauer, might throw in their support if farmers can be convinced to come on board. But failing an effort to sit down with Kulla, farmers need to own the current quagmire.

It is entirely possible too much bad blood has already flowed and farmers are unable to reconcile to any further dialogue with the county. If this is true, farmers need to admit it outright and stop pointing to their grievances as if their concerns were not able to be addressed. By now, everyone knows the county didn’t handle things the way it should have in the beginning.

And speaking of the county, if Kulla and farmers work together in good faith and farmers concerns’ are unable to be mitigated, Kulla should admit failure and bow out. I believe it would be bad form for the county to proceed without the support of neighboring farmers but financial liabilities might overrule such considerations.

In the end, the commissioners have little to lose personally by backing out — none were in office when the process started. The county will likely be on the hook to return some grant money and farmers can breathe an exaggerated sigh of relief. But everyone should view this experience as a potentially expensive mistake and a wake-up call — we’ll see trail proposals in the future. We can all benefit from them if we execute them properly.