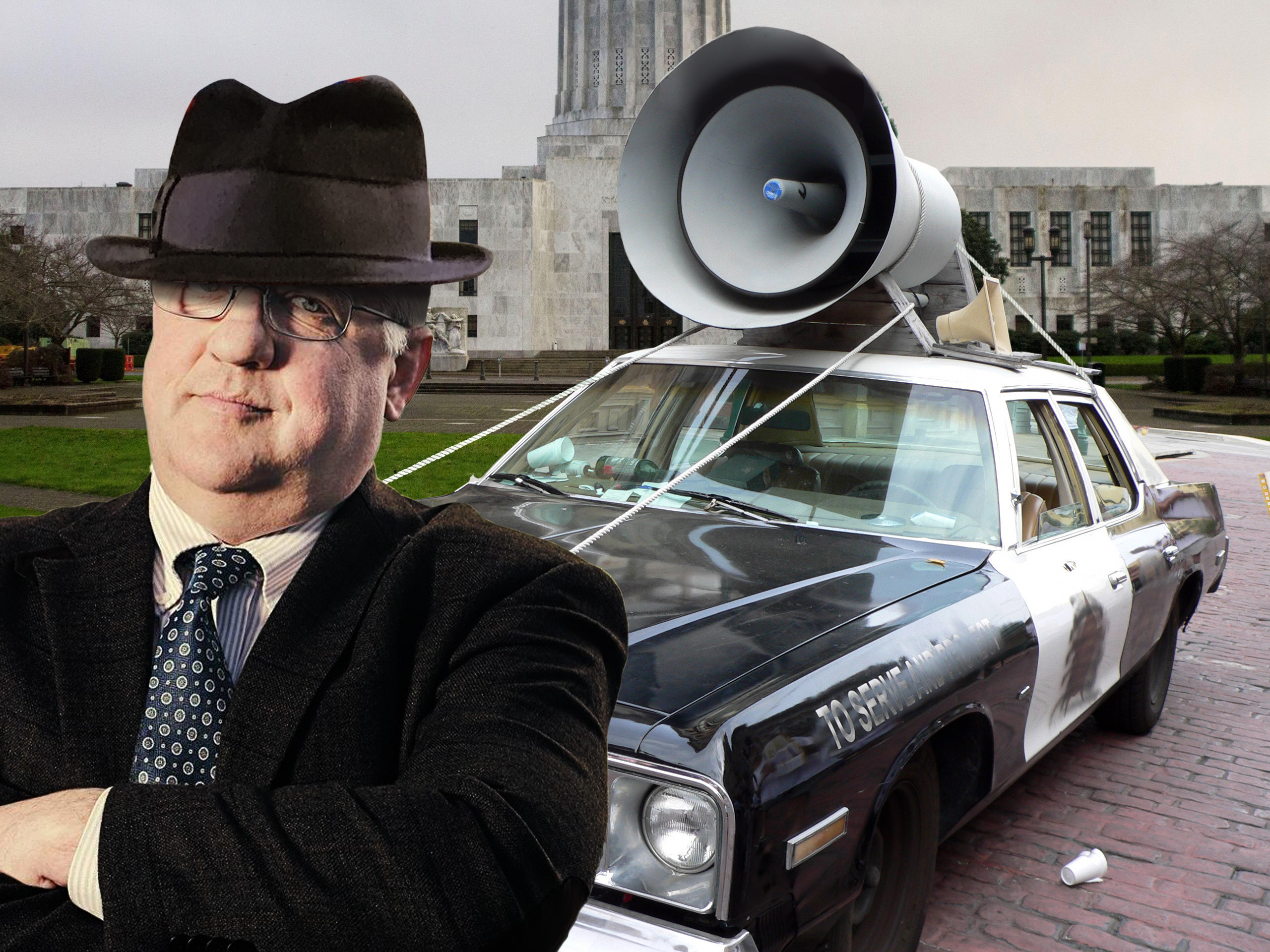 On a mission from God

Back in the 1990s, a friend and I sat in a downtown Portland bar and decided to list all the items in national news that made the rest of the country think Oregon was full of miscreants and weirdos. Within an astonishingly short period of time, we had filled two pages on a legal pad. The entries included the Rajneeshees and the Oregon Citizens’ Alliance. The Rajneeshees were followers of an Indian guru who took over the town of Antelope, Oregon. The Oregon Citizens’ Alliance, a conservative anti-gay group, did their damnedest to get Democrats elected by running conservative spoiler candidates against Republicans — conservative candidates who had no chance of winning statewide elections. (Go ahead and defend the OCA, my conservative friends, but you know they helped the Ds.)

Our list also included a number of individual people who brought shame all on their own: from Sen. Bob Packwood to Tonya Harding, we had embarrassment in spades. But in 2021, we’ve got a new name that makes Packwood’s groping seem downright quaint and Harding’s knee-crushing conspiracy look a playground fight.

Mike occupies what might be described as the most useless seat ever in the Oregon House of Representatives. Mind you, his obstructionist voting record — you can count his yes votes and not use all your fingers — was bad enough but once he lost all his committee assignments, he rendered the seat he occupies in the House chamber truly useless. If you said Mike Nearman’s toilet seat was more productive than his House seat, you wouldn’t be incorrect. (You could also argue the quality of Nearman’s output on the former has been markedly better than his efforts on the latter.)

Now, I do not want to debate COVID here — I know it was a messed-up year for everyone. But I have to come back to what we’ve always done in times of crisis: obey the experts in whatever fields make up the nature of a given crisis. In other words, I am no physician or microbiologist so I must do as the credentialed experts tell me once they’ve deemed COVID a significant threat. Pretty much all of the United States has done this for the last 200 years, whenever a menace to the public good arises.

This means we temporarily give up some freedoms, like we’ve done during war years. (Yes, I know the economic fallout was far more than temporary for a lot of people but that’s not what I’m talking about here.) Most are relatively small freedoms like gas and food rationing, blackouts, mail censors — put in place until the end of the conflict. In the case of COVID, the state Capitol building was closed to the public temporarily, the public business conducted inside freely available to the public via livestream. Having worked in the capitol, I know it is one of the most wired buildings in the state, ready-made to ensure no secret hijinks are taking place inside even in times of a health crisis.

Sounds like a pretty good temporary solution, right? Broadcast the business of the legislature to anyone who wants to see it via internet. Everybody’s happy because we came up with a good solution to keep the people’s business transparent during a declared health crisis.

Not good enough for Mike Nearman and his groupies. When Nearman allowed an angry mob of armed protesters into the Capitol on December 21, 2020, pretty much everyone knew it was intentional. When Speaker of the House Tina Kotek stripped Nearman of his committee assignments and asked him to resign, no one was surprised.

But the best was yet to come. Yesterday about 4:30 p.m., OPB broke the news that Nearman was captured on livestream video talking about something called Operation Hall Pass.

“Which I don’t know anything about, and if you accuse me of knowing anything about it, I will deny it,” Nearman said in the video.

“There might be some person’s number which might be 971-273-3412, but that is just random numbers, not anybody’s actual cell phone. And if you say, ‘I’m at the West entrance’ during the session and text to that number there, that somebody might exit that door while you’re standing there,” Nearman explained.

“I didn’t really say a number but if I had, it might’ve been something like 971-273-3412,” repeated Nearman. The Oregonian has since confirmed the number is Nearman’s cell phone.

The videos have been available on YouTube since December.

I can’t help but think there’s only one reason a grown adult of even the most ordinary intelligence could make the stupendous blunders to which Nearman is prone: he must consider himself on a mission from God. I mean, who else but someone on a Divine assignment would sacrifice himself so completely for the cause? Nearman didn’t even try to hide the evidence of his sedition, although he did lie about it. (Shame on you, Mike. That’s breaking one of the ten big ones.)

Mike Nearman is a one-man clown car who was well-practiced at bringing embarrassing buffoonery to the Oregon House. But that buffoonery crossed a serious line, turning darkly malevolent when Nearman let in his armed acolytes. This mob broke windows, attacked officers of the Oregon State Police Capitol detail and initiated a standoff. Nearman put his fellow lawmakers, Capitol staff and OSP officers in peril when he pulled his childish but dangerous stunt. It’s past time to hold this man accountable for his actions.

Since the voters of Polk County don’t seem inclined to expel Nearman in an election, hopefully House leadership will do so soon. Further, Nearman should earn the maximum sentence for the two misdemeanors with which he’s charged.

Over the years, Oregon has had a long list of quirks and weirdnesses that sometimes made the rest of the world chuckle at us. Mike Nearman was one of those until he wasn’t funny any more.

Mike Nearman is a criminal.