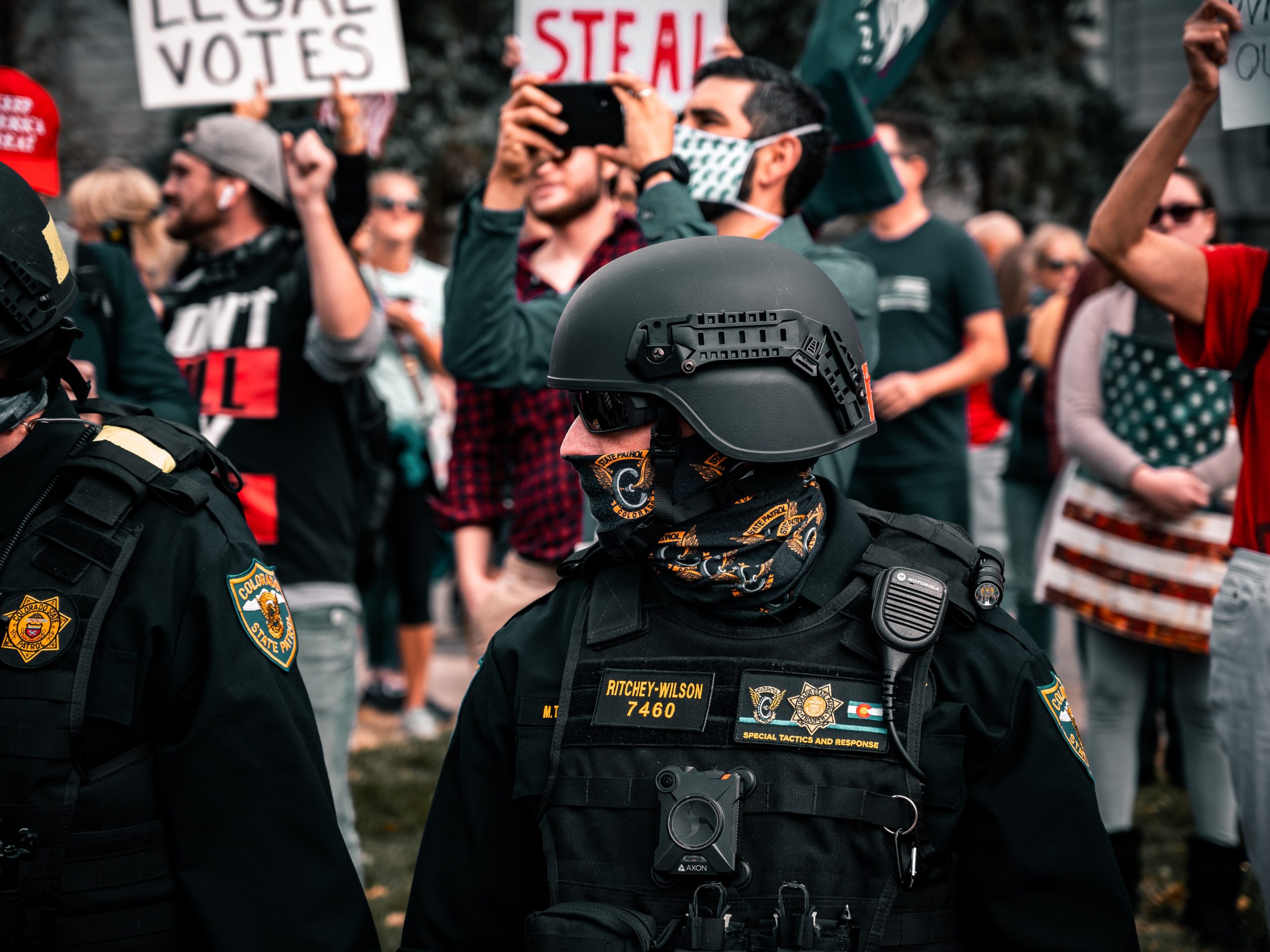 The theft that never happened

I swore I wasn’t going to do it but enough is enough. I can gripe about them, I can point out their error, I can even mock them but I’m not going to out them, that’s what I told myself. I don’t know what changed — I suspect it’s the disillusion anyone would feel when losing a significant amount of respect for a parent. I mean, the man has luxury homes in three states, he’s been successful in his professional life. He was a good father who provided for his kids and set a solid moral example. But he’s embraced perhaps the worst of all false lost causes.

Over six months after Joe Biden’s inauguration, my dad is still firmly and angrily tied to his golden calf, Donald Trump. I thought my father would renounce this and the corresponding Qanon(sense) stuff once it all became so obviously false as to be cartoonish but that cartooning happened long ago and all he’s done is double-down. Sorry, dad, your emperor isn’t riding back into town to claim the mantle of president, speaker of the house, princess royal, bishop of Bayonne, M.D., B.S., V.C., D.S.O., O.B.E., L.M.T., G.E.D. — or whatever absurd tin-pot string of self-awarded titles and credentials your oracle says Trump will claim.

And what’s with that, anyway? Didn’t your mysterious fortune teller pack up tent and sneak away in the darkness of winter?

A while back, I asked a number of my conservative friends to send me the evidence they had for the massive corruption they claim has taken over the land and stolen an election. There is so much evidence, they told me, incontrovertible proof, they said. These are people I care about, people I respect — surely they can prove the veracity of their claims. At first, all they sent was links to sermons and hundreds of hours of taped interviews, broadcasts and podcasts.

Since I can process written material much faster than video, I prefer materials claiming “absolute proof” of anything to be arranged succinctly, much like any academician would arrange a paper. Maybe start off with your claim as title, then a brief synopsis, then clear bullet points linked to supporting documents and evidence. (Please note: I am using the term “evidence” much like a court or a scientific research facility would use it — just so we’re clear, I am NOT equating “evidence” with “opinion,” “suspicion” or “strong feelings.”) When I am shackled to video without transcripts, I am at the mercy of slow-talkers, slow-thinkers and producers who are more interested in filling time slots than making sure their material is well-collated and succinct.

After wading through a lot of long files, several of these people began sending me the daily emails they’re getting from what passes as conservative news sources these days. And I do use the term “news sources” very loosely.

What the Trump Republicans did was brilliant in an odd way — brilliant because it worked spectacularly but odd because, for the life of me, I can’t figure out why they fail to see the damage it has caused the Republican party and is causing the nation. What they did was declare all information produced or released by academia, media or government suspect and, therefore, unreliable. In one fell swoop, they swept aside the traditional sources humans use to establish baseline consensus for any issue humanity faces.

Why is this important?

Establishing a baseline consensus built on demonstrable evidence and accumulated knowledge is the first step in any public discourse. Essentially, a baseline consensus is a set of facts or data that all sides of an issue can stipulate is correct prior to beginning debate or discussion. Basically, it’s the crucial first step to getting public business done.

Dismissing the baseline consensus got the Trump Republicans two things. First, it enabled them to accept or reject any facts, data or opinion they wanted with no input from any other side. Second and worse, when you no longer have a baseline consensus and maintain your own set of information, you don’t need to discuss the issue with anyone but those who agree with the facts you, yourself, stipulate. Ultimately, what this accomplishes is giving the Trump Republicans the best possible reason to not engage: the moral high ground. In effect, if you’ve rejected all data but your own as false, unreliable, biased or skewed, you believe you’re now the only side using good information and, hence, you refuse to engage with any other side because they do not subscribe to your stipulated facts, the only good data. By your new (non-)standard, their data is corrupt. No sense arguing with people who use false facts, right?

Apart from the unbelievable irony, there’s one enormous problem.

The Trump Republicans rejected all of the traditional sources for establishing factual information but they didn’t replace those sources with new ones. Or more accurately, they didn’t replace them with new sources that met any accepted standard of academic rigor or professional discipline — but that’s the joy of the New Right Way! All those old standards are meaningless now. Standards? Trump Republicans don’t need no stinking standards! The New Right Way is embarrassingly Wrong.

So back to my conservative friends sending me stuff. Every day, I had this weird anticipation as I waited to see what they’d send. I never had any idea what to expect but I knew it’d be laugh-out-loud good. Most of their “absolute proof” was desperately short on proof but long on talk — more time-share-style-sales-seminars, drawn-out snow jobs brimming with invective and speculation but nothing approaching proof.

My favorite of the bunch was a doozy! Harkening back to the Pearlas Sanborn Microsoft hoaxes of the 1990s (Google it), this one was so outrageously riddled with cartoonishly false information, I couldn’t believe the person who sent it actually believed it. (My dad’s wife, to her dubious credit, started adding a disclaimer that “some of it might not be totally accurate” since I started point-by-point refuting her best material.) But as much as the gallows humorist in me wanted to guffaw, I knew I should be truly alarmed that she and millions like her believe every absurd statement in this email.

Statements like this one, complete with spelling and grammatic errors and so much more:

“Trump just declassified all the Washington scandals. He is hiding at a military base. The attack at the capitol was antifa and BLM, mostly. This is not in any of the news or social media. This is why they are censoring everyone. They just DECLASSIFIED everything! Share it far & wide. Here we go! Wikileaks just dumped all of their files online. Everything from Hillary Clinton’s emails, McCain’s being guilty, Vegas shooting, Steve Jobs HIV letter, PedoPodesta, Afghanistan, Syria, Iran, Bilderberg, CIA agents arrested for rape, WHO pandemic. Happy Digging! Here you go, please read and pass it on…”

Then the overwrought message provides links to Wikileaks files that have been released probably 10 times in as many years. It breathlessly instructs the Trump supporters to spread the message because:

“IT’S HAPPENING! Military takedowns and arrests begin this wknd and will continue forward for the next 13 days/nights. Some international raids have already started. Italy has also been found complicit in our election fraud. Everyone will be getting emergency alerts on their phones, tv’s, radios & internet. It will override all other broadcasts and could last for several hours at a time. Do not to be scared of what’s coming as it is for the safety of our nation for this to unfold. DO NOT travel to any large cities (especially Philadelphia) for the rest of the month. Military operations will be taking place in many of the major corrupt cities. People will start rioting once this intel breaks thinking Trump is a military dictator. He only has 13 days to put this dog down.”

The message goes on to describe riots and National Guard and U.S. Marine Corps troops being mobilized as the Insurrection Act of 1807 is implemented. It scoffs mightily at the notion that Donald Trump is a dictator just before it tells its acolytes that the “smooth transition” Trump promised was that of he and his new military vice president seizing office along with his new cabinet. I assume Biden will be imprisoned.

Seriously, you can’t make this stuff up. And they believe it, hook, line and sinker.

While it causes people like me great dismay, this newfound freedom from constraint must feel invigorating to Trump Republicans. Trumpists have declared that nothing is trustworthy but they, themselves; everything is corrupt but they, themselves. Hence, they, themselves become both the source of truth and the arbiter of truth. No traditional fact-checking, no consensus, none of the former checks and balances, no need to rely on traditional professional disciplines or academic rigor. Free from the repression of traditional constraints, it’s ridiculously easy for opinion to assume the role of fact. Opinion becomes truth when all constraints of traditional human discipline are removed — when you’re the arbiter of your own truth, no one can tell you what’s false.

And then they send out emails like the one above.

An entire movement can say whatever it wants — anything, the sky is the limit! Opinion becomes truth, rule, policy. Then that truth, rule and policy is disseminated in an echo chamber where no one objects, no one corrects, no one restrains. There are no boundaries. They say whatever they feel in the moment, they parrot each other, stating opinion and conjecture as incontrovertible fact — they need no evidence because everything is corrupt and nothing is trustworthy. Traditional evidence is worthless. All that’s left is opinion — all that matters now is opinion. Indeed, the only thing to be trusted is opinion.

When facts are firmly rejected and replaced by opinion, the untethering from traditional restraint must feel indescribably exhilarating — maybe even enough to make that amateur invasion of the U.S. Capitol look like a good idea at the time.

The optimistic side of me wants to believe this insanity is temporary, that things will go back to right once COVID subsides and the world returns to a semblance of normal. I have hope many of these conservative Trump supporters I care about will look back a few years from now and realize how their beliefs transitioned from plausible to preposterous when they discarded the only tools we fallible humans have to keep our worst imaginative selves in check — how we all have a legitimate need to keep our wildest conjecture in the realm of fiction and prevent it from overwriting fact.

Either that or they’re right and I’m the one who will live to eat my words and admit how blind I was. Yeah, right. While the sun is shining and most of us are looking ahead optimistically, they’re still holed up in their walled echo chambers, bitterly decrying a theft that never happened.