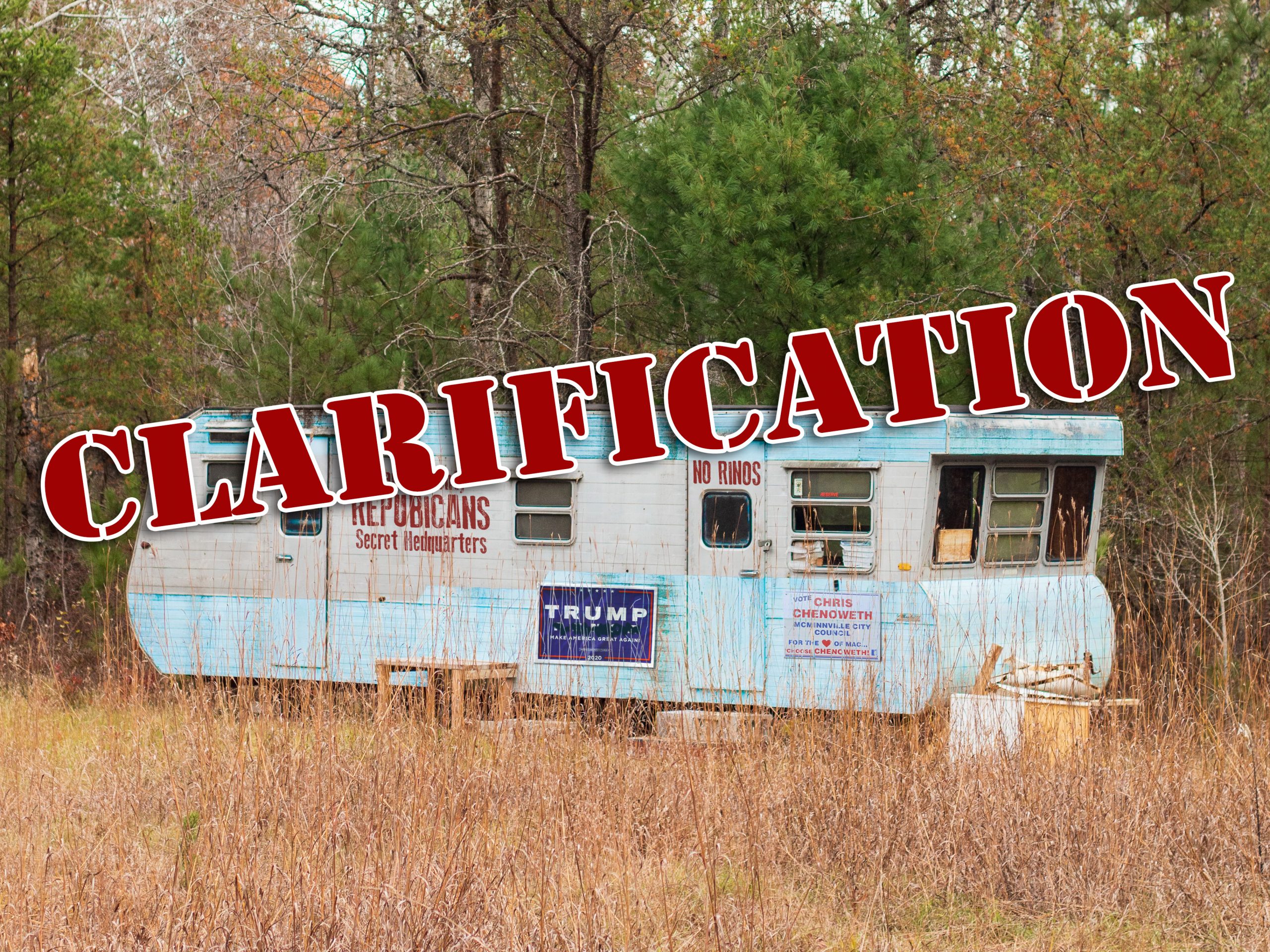 The satiric mockery piece I posted on November 2 was universally interpreted in ways I did not intend. When something is misinterpreted by pretty much everyone, it means the author failed miserably to convey his point. In my attempt to be both humorous and mocking to a small group of Yamhill County conservatives, I wound up offending the entire right, most of the left, elected officials, pundits, people of modest means, people who live in manufactured homes, people who wear soiled sweatpants — pretty much everyone.

The piece was targeted, as I stated, at a very small group of people who have used two specific tactics to politically punish people who oppose them. I want to state unequivocally that the piece was not directed at Michael Firestone or Chris Chenoweth — the only reason Chenoweth’s sign appeared in the artwork was because I was in a hurry to finish the artwork and the only Republican sign besides Trump that I had knocked out and ready to composite was a Chenoweth sign and I really felt the trailer needed more than one sign. Bad judgment for me — bad luck for Chris.

The trailer reference wasn’t intended to represent people of modest means — it was, like the photo, supposed to be an old trailer hidden away in a field somewhere. But the way I wrote it sounded like I was mocking poor people.

The real focus was supposed to be the dirty tactics they’re currently using. The intent of the essay was to dilute the impact of both tactics by calling them out publicly.

The first tactic with which we took issue was the posting of numerous false one-star negative reviews of local businesses on platforms such as Yelp because the business owners took a political position that displeased the aforementioned group of conservatives. When you’ve worked hard to build up a clientele and good will in the community, online reviews can actually damage a business in traffic or in the algorithms that determine online ad placement. When it’s your business, this can be a big deal. The tactic is dishonest, dirty, childishly vengeful, sometimes illegal and it has no place in this community.

The second tactic is a very subtle intimidation the same conservatives use to cow the opposition, unsettling some into fearing for their safety. This practice is difficult to prove but it’s absolutely being used. It can mean large armed men wearing vests covered with patches representing groups known for potential violence who stand around and stare at opposition members attending or speaking at rallies. Worse, there are a number of women who have stated they were followed as they canvassed for causes the conservative group vehemently opposes. Several are convinced their homes were watched at some point.

I cannot personally attest to these incidents but enough disparate people have voiced real fear that I believe we have a problem. We can’t prove it at this point, so please don’t ask. Again, we believe it’s a small group of back-end people responsible for these actions — but we really hope reasonable people from both sides of the aisle will come out and roundly condemn any such tactics used by anyone on any side.

These tactics are dirty and have no place in local politics. We will call them out publicly as they happen.

We know that all of us, regardless of political affiliation, love this community and we believe it is above using these dirty tricks.

The one intentional thing the essay did accomplish was getting people’s attention. But I apologize for getting your attention in such a mis-guided manner. That’s totally on me.